Ordained in Maryland, Jewett was heading for St. Louis on horseback to found a parish in the untamed west. That career objective was revised after he stopped at Capt. James Wasson’s Eagle & Lion tavern in Terre Haute and was persuaded to preach the following Sunday. No minister in local history had a more immediate impact on the citizenry than Jewett.

Jewett agreed to stay if adequate support could be mustered to build a church. An Oct. 13, 1834, subscription amassed more than 50 pledges including community leaders like Amory Kinney, John F. Cruft and Joseph Graff. Jewett returned to Baltimore to bring his family to its new Wabash River home. Struggling to cope with the accidental death of a son on Christmas Eve, the bereaved parson conducted an organizational meeting at the Vigo County Courthouse on Dec. 30, 1834.

Among those first members was Amory Kinney whose legal expertise, at the risk of his livelihood and career, ensured that Indiana would not be a slave state.

The first church building was erected on the corner of 6th & Cherry (where The Deming now stands) in 1837 and replaced the practice of worshiping at the Courthouse.  This building suffered tremendous damage in the 1853 tornado and a subsequent building was erected and dedicated in 1857.  Seating over 800, First Congregational Church was the site of many historical and spiritual events, including a revival meeting by famed preacher Rev. Henry Ward Beecher, a young and dear friend of Rev. Jewett.

Poor health forced Jewett’s resignation in April 1860. He was succeeded by Rev. Lyman Abbott, a New Englander compelled to delicately steer a congregation encompassing diverse sympathies through the Civil War. Selected by President Lincoln to head the American Union Commission (later the American Freedmen’s Bureau) during Reconstruction, Abbott resigned in 1865. He became the acclaimed editor of The Outlook, an influential political magazine; a prolific author; and Beecher’s successor at the Plymouth Church in Brooklyn.

At the beginning of the 20th century, the decision was made to move the church to its present location, 630 Ohio.  At the dedication ceremony on June 14, 1903, these words were shared:

And, may riches and peace, unity and brotherly love, judgment and mercy harmonize in the life and service of this people; and as the years roll along and this house remains growing in power and significance, and sentiments that gather around it, and the holy associations and sacred memories of those who worship in it seem as though they had a great cloud of witnesses hovering around them.

And so on and evermore, with all Thy saints in all Christian time, may we sing as they have sung: “Glory be to the Father, and to the Son, and to the Holy Ghost, as it was in the beginning, is now, and ever shall be; world without end.” Amen

This ground, formerly devoted only to secular purposes of life, has now become holy ground. A beautiful structure rears its proud head to the sky.  Much that skill and taste can do, has been put into a work which you considered holy, and what is more, you have put into it, willing hearts and pious souls, making it truly a sanctuary. Well you may exclaim, “Surely the Lord is in this place, and I did not know it.”

A church is not a building – it is the people who gather together to worship and serve and First Congregational Church has been gathering and worshiping for many years.  Through the shepherding of twenty-six ministers of the Gospel, her work has continued in service to God and community. 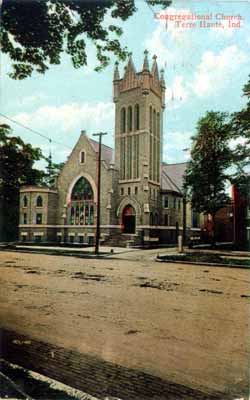